Tribute to Nina the Caracal

Nina is free now, back to her roots in SA. We scattered her ashes here in South Africa at the new project with approval of resident female Lea who followed with interest what we were doing in her territory, she loves her new enclosure. Now we hope Leo will arrive soon. The project is dedicated to Nina, the ambassador of the caracal species. Forever in our hearts!!

To PK and KG: You know, but We know too! Never forgotten, never forgiven! 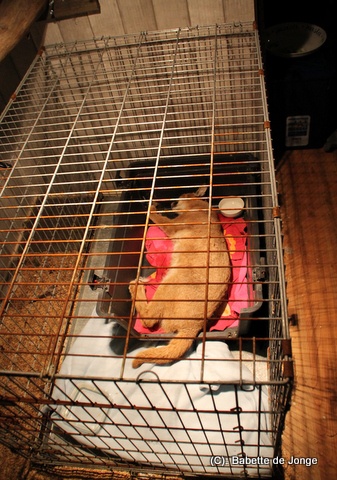 Compassion for animals is intimately connected with goodness of character; and it may be confidently asserted that he who is cruel to animals cannot be a good man – Schopenhauer- 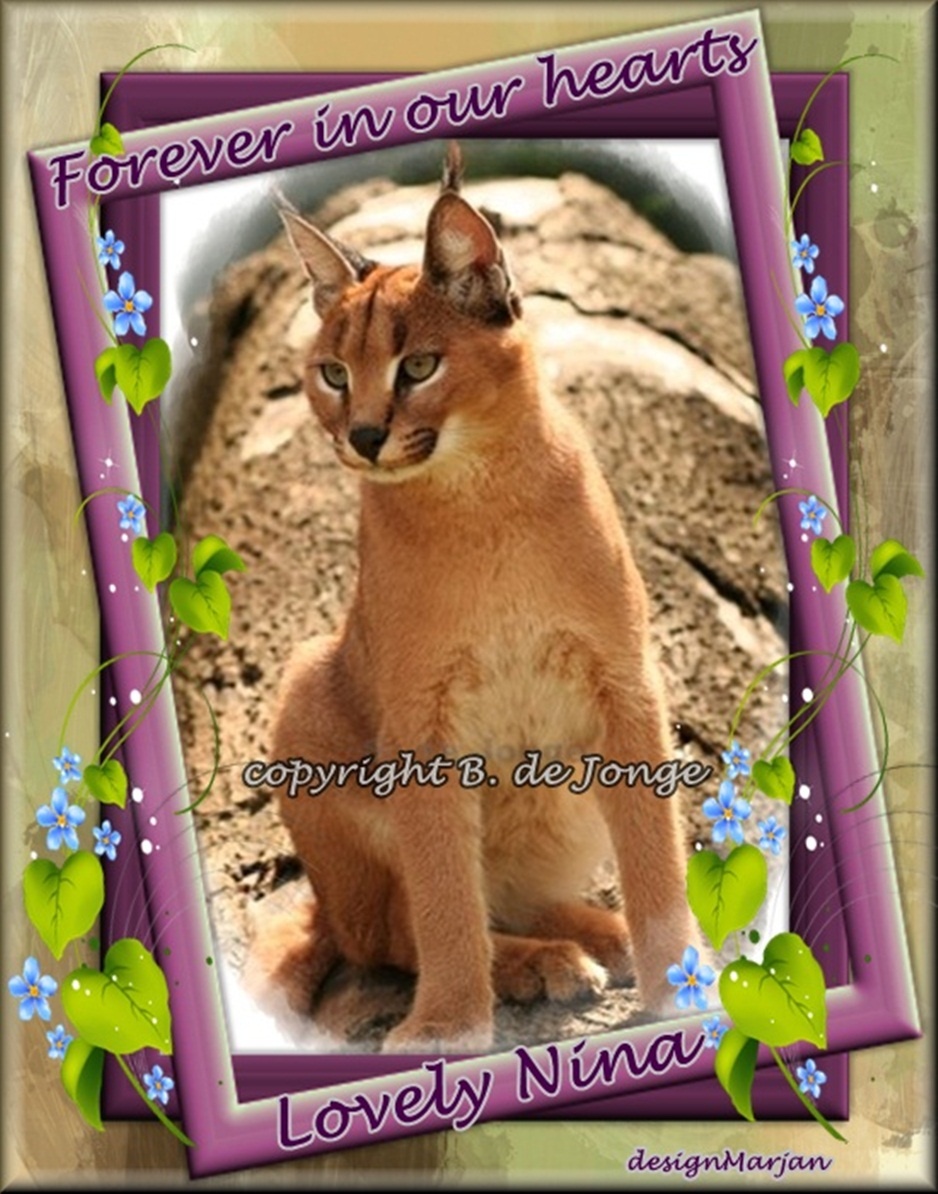 How on earth can you molest a young human-friendly caracal like NINA?

In this document you find the only truth about Nina, the caracal, and the injuries leading to her unnecessary and cruel death. With our hand on the bible, Nina’s ashes in our hands, in name of true animallove, and guided by reports of experts, the autopsy report, contradicted statements by board and caretakers at Landgoed Hoenderdaell, and a thorough investigation and knowledge on our part, we can tell you with 100% certainty that Nina’s dead wasn’t an “unfortunate incident” as the sanctuary claims. Apart from that no respect whatsoever to Nina and her owners was shown in words and deeds.

Lots of stories are being told about our ambassador caracal Nina and the way her life ended in a cruel and unnecessary way, on September 14th, 2012 in Anna Paulowna, Netherlands at Landgoed Hoenderdaell/Stichting Leeuw. Unfortunately most of the stories are untrue. The people at Landgoed Hoenderdaell are telling different, and above all untrue, facts about how Nina died and got her injuries. All their statements we have here on b/w in our reports. It is clear to everyone they are telling lies in order not to get the blame. They first pointed a finger at the head caretaker Rutger de Lange, but after they’ve been told by Babette those were untrue facts, they started pointing fingers at WCW, Babette de Jonge, and the kittensafe fences she placed herself in the enclosure, already when Nina arrived 4 months earlier. They say their enclosure is not to blame and they are not to blame. Yet, they are telling nothing but lies. We investigated the matter with an expert and have checked the enclosure and fencing ourselves many times. Also we received first-hand reports of the head caretaker Rutger de Lange, who was on the spot first of all and did inspect the fencing and the enclosure right from the starts, stating there was no proof whatsoever what might have caused the injuries. However, bird-of-prey trainer Karel Geurts, who joined him for a few moments, was claiming to know the reason for her injuries already at one glance. From that moment on Karel held on to this statement, even though Rutger said he couldn’t know as he didn’t even know. Strange enough, the owners of the sanctuary, only believe Karel’s statement and not any of ours. They refuse to investigate themselves or to listen to other options. They probably all benefit more with his explanation, which will make you start thinking. For sure there’s more going on. This 100% wasn’t an accident and WCW is not giving up until the person(s) who did this to poor little Nina will be named and shamed publicly. We have a clear indication of what happened and why, so even if lots of people (from the Hoenderdaell camp) decide to believe the lies and turn a blind eye (showing their true colours: NO real animalfriend!!) WCW and all its supporters will continue the investigation, and make sure Justice will prevail, backed by all the just mentioned proof we have colected: reports by experts, autopsy report and reports by lots of different vets, tape of what’s been said at the last meeting. Until the moment we can name and shame the persons, Stichting Leeuw and Landgoed Hoenderdaell of course will be responsible! So don’t cheer too soon – NINA your suffering won’t be in vain sweety!!!!!! 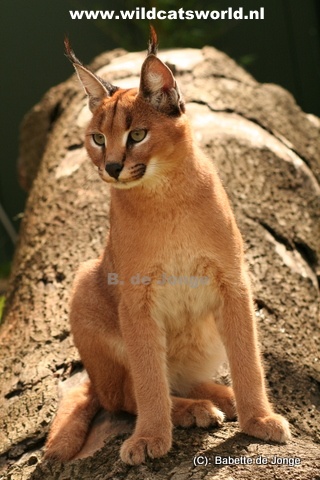 Our ambassador caracal NINA who died in a tragic way at Sanctuary Leeuw/Landgoed Hoenderdaell, Anna Paulowna/Netherlands.

Nina was a (almost) 8 months old caracal, ambassador caracal of Wild Cats World, who lived at the Stichting Leeuw sanctuary in Anna Paulowna, on Landgoed Hoenderdaell, in the Netherlands. Babette de Jonge of Wild Cats World was boardmember of this sanctuary/foundation for catexpertise and welfare, until she left the board after quarrels over having a circus trainer in for the sanctuary followed by the horrible and unexplainable dead by WCW ambassador caracal NINA.
Nina was favourite among all visitors, workers, the head- caretaker and volunteers, as she was so easy going and very friendly to humans, even though she was raised by her mother Silver in Olmen Zoo, Belgium.

When Nina was 3,5 months old she moved to our sanctuary as mommy Silver always starts picking the hairs of the cubs from that age on and Nina already started to eat meat. WCW was busy arranging a caracalfriend for Nina to keep her company in the sanctuary.
Robert Kruijff, who wasn’t a boardmember but still had more say than any of the boardmembers didn’t want a caracal from South Africa, he preffered to keep Nina on her own, but as WCW is only going for welfare and caracals in captivity need to be kept in couples, esp. young animals, we searched everywhere. We found a male at a farm in SA (not WCW related) but after a short while they sent us the message the caracal was killed by lions due to a mistake by a worker at their place who left open the gate so that he started wandering at night and ended up at the lions. WCW went on searching and found a male in France, but sadly they killed NINA shortly before his arrival, after a dispute about Sascha and Janine Prehn two circustrainers hired without Babette and any of the other boardmembers knowing. Of course it is not good to combine circus with conservation. WCW already found this out and passed this knowledge on to the boardmembers but as usual they were only interested in getting their own way.

Strangely enough…a day after the quarrel of Babette and the rest of the board in Stichting Leeuw about giving the circustrainer a job to “train” the cats in the sanctuary , Nina was found in her inside enclosure very badly hurt. It was said this happened in her inside enclosure, where strangely NO signs of an accident (through a fall) or other threats by the fencing were ever found, not even by an expert investigating the matter in name of WCW.

The “accident”
Nina had very severe injuries, like an open fracture to her right paw (who was amputated after that), a broken jaw and a few days later she suddenly had an internal bleeding which eventually caused her death. All these injuries and no signs of where this could have happened. No blood and fur on the fencing and other places, just a few bloodstains in the middle on the floor, as that’s where she had walked to find a hiding place. She was brought to the vet much too late as well as at the sanctuary they wanted to put her asleep. Babette of WCW had to tell which vet they had to call and only in the afternoon she was brought there. So the whole night (evening probably already), morning and part of the afternoon they let her suffer. Suddenly this story was changed to their benefit, telling us and others that the owner was the one who urged a vet to come in. At the sanctuary everybody knew already that she would be put asleep even without contemplating the owners, WCW. As if this wasn’t bad enough Karel Geurts started gossipping to everybody, who wanted to hear, that he was threatened by a Mike (even though he was the one writing this Mike and calling him names, just because he was telling the truth, that this wasn’t an accident) and he told Nina had to be put asleep and how the aftercare was badly done by headcaretaker Rutger (in daily cooperation with the vet and Babette/WCW). On the thursday, just when it was getting slightly better with Nina, Karel was badmouthing the Stichting Leeuw caretakers openly on Facebook. The whole day there was improvement, even the moment Rutger left to have a bite after 18h00 but suddenly, one hour later, when he returned Nina was as bad as can be, in shock with bloodstains on her fur. The latest care by a vet who was called in urgently, didn’t help anymore and Nina died that night, September 14th, due to internal bleedings, that acc. to the autopsy report weren’t there yet on the monday she was found with her injuries, so this must have been caused by a new fall (impossible, re. her situation), but more likely by being hit hard (again!) or poison. 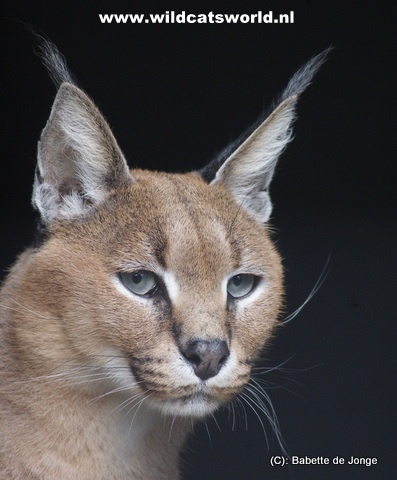 Caracals
With their sleek, streamlined bodies, reddish gold coats, and the dramatic markings on the face, caracals are among the most beautiful of cats. Also called the desert lynx, medium-sized caracals have no spots or stripes and have longer legs than a true lynx and a slimmer body. They are the heaviest and also the fastest, and best of climbers and jumpers, of all smaller cats. Like the rest of the small cats, they may purr when content and make a variety of other mews, growls, and hisses to express their mood. 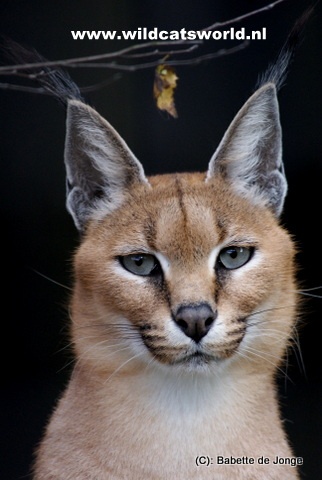 What do we want to achieve with this petition?

Of course it is just NOT done to intentionally hurt a young and human-friendly cat like NINA, nor any other animal or living being for that matter. By hurting the ambassadorcaracal of WCW they made a huge mistake. We won’t rest until there is justice for NINA.

Sanctuary Stichting Leeuw on Landgoed Hoenderdaell refused to investigate and come with a genuine explanation. But that is our right and this is what we demand, nothing less than that.

We want a genuine and truthful explanation (not the one we now have on b/w which was based on not possible and untrue facts, as we can prove and already did!). The sanctuary must take responsibility for this “incident. http://www.thepetitionsite.com/411/609/598/justice-for-caracal-nina-against-violence-to-innocent-animals/

The last photo taken of NINA alive on thursday evening 13th of September 2012. After the urgent visit of the vet I asked the headcaretaker Rutger and his girlfriend Renske to take NINA home with them. Didn’t want her any longer in the cold and dangerous enclosure at Stichting Leeuw. I had made arrangements for Nina to stay in care at a friend’s place after this night, so that I could go to South Africa knowing she would have the best care, but unfortunately Nina didn’t make it this night and she died. Forever in our hearts and justice will prevail. She is killed by evil people and they won’t get away with this.

– The petition and the sad event concerning Nina and our great loss is getting incredible support world wide. In the meantime we know for a fact that the owner and bird of prey caretaker are the ones responsible for injuring our young, innocent caracal, who due to these severe injuries lost her life. The petition is not only for Justice for Nina but for all animals that are killed in the same, low way with no reason, just human cruelty.

– Only after Babette left the owner did e-mail the circustrainers that they were not welcome anymore. They didn’t give any reason.