Skip to content
R.i.p. dear Sandy – Sad start of the New year as we sadly had to let go of sweet Sandy (African wildcat) on January 6th 2018; no progress after week on drip. The true cause of her poor immune system (not rare for the species) wasn’t clear, so we asked for an autopsy. Hopefully we get more info soon, also essential for the other wildcats and the whole species. Sandy will be missed, as she was such a social and sweet little girl. Luckily her sister Stars is still going strong, like her bigger brother Maurice from a previous litter of parents Max and Louise.
Sandy and her sister Stars are born at Wild Cats World/Eastern Cape, September 20th 2016.  They are born in the second litter of African wildcat female Louise & male Max (with pure African wildcat genes).
If they aren’t moving to another valuable place doing African wildcat Conservation, or aren’t released in a Private Game Reserve (mission of our conservation projects), all youngsters born at our sanctuary/conservation project will have a permanent home with us. 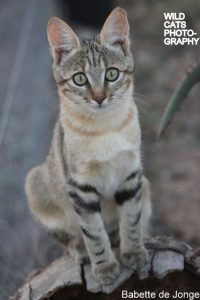