One of the projects focused on (wild) leopards Wild Cats World is supporting; very essential for the very endangered Javan leopard. A smashing job done on ground level by Wanicare Foundation and Cikananga Widllife Center. We cannot thank them enough for all the work they do for our precious leopards and their endangered population. A project really worth supporting. If anyone considers a donation, please let us know!! Here’s the March up-date!

The Javan leopard (Panthera pardus melas) is an endemic species to Java and currently classified as critically endangered species on IUCN Red List, since there are certainly less than 250 mature individuals, possibly even less than 100 left in the wild (Ario et al., 2008). The Javan Leopard is critically endangered as a result of pet trade, poaching, habitat loss and fragmentation but also due to a decline of prey which forces leopards to enter villages to find food. In the last years the number of Javan leopard – human conflicts have significantly increased, and Cikananga Wildlife Center evacuated 9 conflict leopards over last 4 years.

“Here’s some news on the leopards. At the end of March we were involved in 3 Javan leopard conflicts!! The first one occured in Gunung Halimun Salak National Park. Here we were called in as a leopard was found stuck in a trap, seriously injured. We went there immediately and luckily the situation was less serious than expected, although it was of course very stressfull and bad for the leoapard. Its paw was firmly stuck but fortunately not very injured. We tranquilized the leopard and released it from the trap that was actually for wild boars (illegal of course!). After consultation with local people and the rangers of the NP we had the leopard released in the same area (only further into the forest). In this area were no leopard and human conflicts, there were never leopards caught in this way and there was still a lot of  prey for the leopards to hunt. The local population even was in favour of the leopards. And since the animal wasn’t badly injured, knowing with almost 100% certainty this was his own territory, it was the best option to release straight again. We didn’t hear anything after this, so a happy ending for this leopard.
For us, this was also a good learning process and in this way we could also see what’s important in the future, things we had not thought of before in our endeavours to rescue the leopards. So this can be included again in the leopard release management plan and document we are working hard on.
On the way back to Cikananga we got a call that a leopard conflict was happening in the area of Cianjur. The police was already involved, and they were trying to capture a leopard. We went there and it turned out to be a young very weakened leopard. The story told by the locals; the leopard walked to this village and did kill life stock has caught and was trying to attack people. Considering the bad state the leopard was in, we have strong doubts about the story as it was told but it’s always hard to really know the true story behind a leopard capture or kill. As the leopard was already caught, scrawny, dehydrated and weakened, and as the story about what had happened to and with the leopard was so unclear, we decided to take him to Cikananga. Release him again would be too risky. As she was so very weak it was not possible to use anesthesia in order to do full medical check and tests on diseases. We aren’t even sure about the sexe of the leopard but we think it is a female. She is now regaining strength, does eat each day and we gave antibiotics as she smelled like she was suffering from some sort of infection. Further on she got deworming and daily vitamins.  Hopefully she can endure aneasthesia for a quick checkup soon. We think she is approx 1.5-2 years old. The third case was a leopard, trapped not far from Cikapuh who was in a very bad state, very weak. Presumably poisoned.  Not much we could do there and we soon heard she indeed died.” 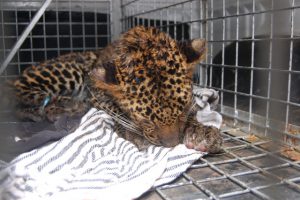 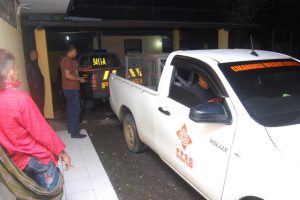 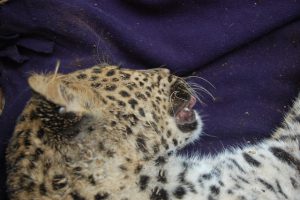 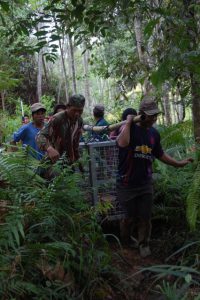 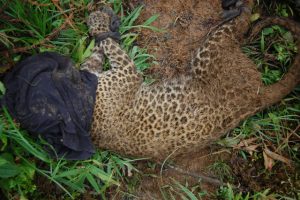 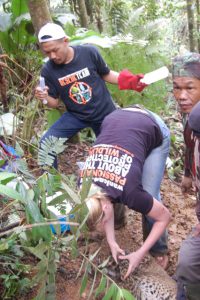 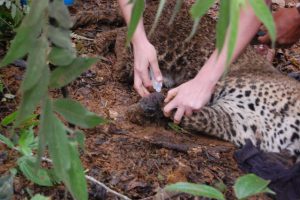