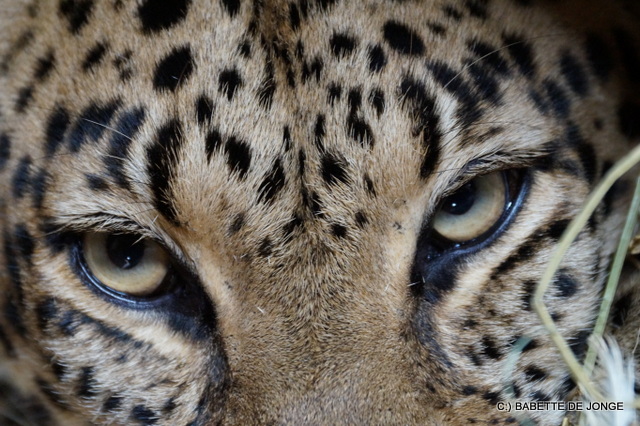 It is obvious that the leopardspecies still is far less understood,and misjudged, compared to all other species. In the wild they for sure are under threat, but also in captivity lots can be improved for the species. There’s so many studies, so-called facts or scientific documents about the leopard. To start another project is only adding when one does something completely different, trying to show the other side of the medal….So much more to the leopard as we found out already……….. 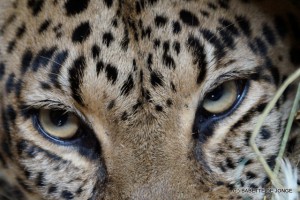 When I (WCW founder/director, Babette de Jonge) saw leopards in zoos, sanctuaries or private projects, I was crying deep inside. This was one of the many reasons to start working with and for leopards, but also to not only focus on the wild (and natural habitat) of the species but also on what can be improved or learnt in captive situations. For sure the leopard isn’t going to be happy in a too small enclosure (length and hight), locked up alone (even though said to be solitary) or at times as couple or with cubs, with no enrichment and bad/irregular feeding; kept wild with no bond with the human caretaker(s). Also the other side isn’t improving their state of mind and happiness: to be cuddled and followed by humans all day, week, month, year……

As for a wild leopard, it won’t be happy and never will be captured and caged. If an organisation or zoo refers to this as a rescue, because they are not killed but kept in a cage instead….better to let him go, he will never be happy and never be as relaxed as a captive born leopard.
In Wild Cats World I not only wanted to give the best home possible to a few (captive born) ambassadors of their species, but to contribute to the understanding and conservation of the species and to try to reach the impossible, the construction of a “leopard Pride” started and an “experiment”, who has proven so many scientific or zoological facts and stories about leopardbehaviour wrong already, which will be documented step by step,  a few highlights of the project and experiment presented already on this website….

Phase I – WCW leopardproject: understanding, education, conservation. The other side of the leopard.
As said our Leopard Conservation Project not only focuses on the leopard in the wild, but also on how to improve the lifes of captive born leopards, with as main goal: a better understanding, education and eventually contribution to the species in their natural habitat. After studying the leopards in their natural habitat as well as in captivity, it was time for our project.
But how did it start and more important which so-called scientific “facts” and publications of the leopard and their behaviour can we already deny.
– Are leopards solitary and not living in peace with other leopards?

WCW: if enough space and food, no problems at all, not in our project but also not in the wild we experienced.
– Are leopards nocturnal?

WCW: they usually tend to be more active evening/night/morning, but they also hunt or play daytime when not too hot. (observations in wild and captivity)
– Are leopards elusive?

WCW: They have the name, but also in the wild they tend to become less and less elusive, more often great leopardsightings everywhere.
– Do males fight over territory and females?

WCW: Not when enough space and food. We now even observed how males do share females. Not at the same time but each their own period.
– Do leopards kill other leopards, like unrelated cubs?

WCW: not, when enough space and food. For sure not their own offspring
– Are humanraised leopards more dangerous and not capable of living with their own kind anymore?

WCW: Not true! – Are sexually mature leopards more dangerous to humans they bonded with early on?

WCW: treated the right way: NO!

Males do even see the difference in men and women and react to that.

– Are humanraised leopards able to raise cubs themselves?

WCW: Yes
– What about the wild instincts of leopards in captivity?

WCW: the same as the wild leopards. They are only more relaxed in certain situations, so better to socialise them instead of keeping “wild”
– Are leopards more dangerous compared to the other big cats?

WCW:  not at all, but they are the true cats amongst the big cats, and on top of that: opportunistic and clever! So not a match for ignorance and stupidity, but not more dangerous from birth.

All of these subjects will be worked out in the future document (book) about the whole project. It started ages ago already by the observation of leopards in the wild, but also in zoos and sanctuaries…..The leopard conservation project officially started in 2010, and in 2011 we decided to do one project with ambassadors, Feline being the first to arrive. 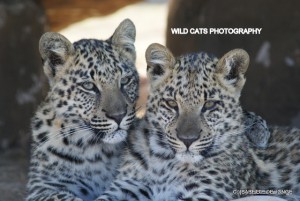 Our four leopards were sadly taken away from their parents and offered for sale, for anyone interested: so also canned hunting industry. Even though it is tempting and a wonderful feeling to be a sort of “surrogate” parent to a leopard, this was not our intention. We wanted to keep the bond but above all to reunite them a.s.a.p. with their own kind, to be leopard and not humanized. Felix, Feline’s brother, was still on the list after 3 months so we decided to reunite him with Feline, and when they were young adults first Felipe and a year later Felicia were introduced to them as cubs with no problems at all. They all loved to be with leopards, and the huge “homes” (connected for enrichment) we had constructed for them is benefiting to their happiness. The experiment started along the way, to keep them as sort of a Pride. In fact the 4 leopards initiated themselves to this…..always looking for each other’s company…in good harmony. And there’s enough space to have private moments as well. In these 5 years we learnt so much about this incredible species, and the best education is to share this info with everybody who is interested and above all who has the wrong idea about the leopard.

Extra ordinary behaviour of the leopards we were able to observe in their natural habitat but even more so in our own conservation project, where we a.o. experiment having leopards in a sort of a Pride (like e.g. lions), existing of two (adult) males and two females, introduced as unrelated leopards (even though Feline and Felix are brother-sister, they didn’t grow up with each other first months, and were also introduced as “unknown” members of their species), at different ages….two of them introduced as small cubs to unrelated young adults….all without difficulties.
Now all four adults are sexual mature, and mating, still no problems and even exceptional behaviour was observed. Of course when our female Feline was on heat she had to be seperated from her brother Felix as we don’t want any inbreed incidents. With Feline being pregnant by Felipe and Felicia being on heat, they could all four be together, and even though we selected Felix to be Felicia’s mating partner, she could make the choice herself as Felicia and Felipe are also not related.
The estrous cycle of leopards lasts about 46 days during which females are on and off on heat for periods of 6-7 days. This is quite long and taking its toll, not just on the females we noticed but also on the males, like Felix who was determined to follow Felicia everywhere and to mate frequently during this period. After about a week, he was exhausted, and gave up. Felicia took a little break and continued to be on heat…..Felipe took over and Felix allowed him. Felipe is a bit more of a lazy lover compared to Felix as Felicia has to come to him and then he was willing to mate, even right in front of Felix, the dominant male. Most exceptional was Feline’s part as after every mating session, Felicia went to Feline to have a grooming session. The boys accepted this and waited patiently, respecting Feline to do so. And to make it even more exceptional….also we found Felix on top of Felipe a few times in between. Not just as sign of dominance as it was a true mating ritual, and this even took longer then the male-female mating. Felipe accepted his role, even though is also is an adult male and dominant at times, for sure topping Felix in size. Both males do scent mark and defend their territory, also human males have to be careful.
With Feline being pregnant, she is mothering Felicia even more, seems to practice for her (near) future mother role. Felipe at times doesn’t leave Feline, and she is grooming him, like they are knowing they become parents soon. Felix, as brother, keeps more distance, and he and Felicia at times withdraw together.
Now it would be the next step in the Pride to see if the cubs can be born and grow up, being accepted by all four leopards. We are confident this won’t be a problem either. 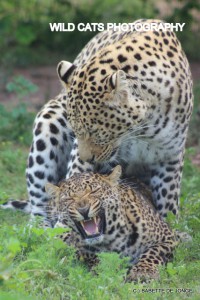