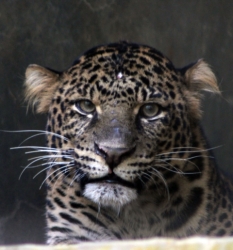 Soon we will give another up-date about the 3 leopards in Chikananga Wildlife Centre, Java, for which the battle for release is still going on. Sadly the situation gets worse and the habitat is fast decreasing. There’s more and more leopard-human conflicts, and as more leopards end up being captured, lots of are ending up in zoos now as there’s no more space in the Wildlife Center. This is a very horrible situation, and WCW is now thinking further ahead in the future what could be done
to save the Javan leopard species. Them ending up in the horrible zoos on Java basically means the end for these individual leopards. We have seen this in India at many places.

For a wild leopard to end up in a small cage close to the biggest enemy who are often teasing the leopards in these zoos (from what we have heard/seen) means the end. Not good for the bloodline and species but you can better do the leopard a favour by putting him down than long life sentence in a cage. We don’t want to give up the fight and hope that these leopards can be released again in their natural habitat, but being realistic we must also consider other ideas to avoid leopards ending up in zoos. A difficult situation, which asks for long and deep thoughts and decisions!