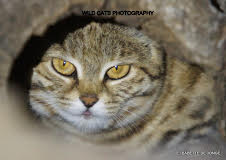 As part of a conservation and breeding project for the endangered black footed cats (felis negripes), our 3 ambassadors Blacky, Beauty and Diva were temporarily relocated to Cats Conservation Trust.  Now we all agreed it was time for them to move back “home” again, and back in our (WCW) care. Firstly the two B’s arrived home safely, and it seemed they recognised their first home where they already lived for quite some time before moving to CCT for a joint venture. For Diva this place is new as when we got her she immediately moved to CCT, arriving there before the two others. All three are thriving well and Blacky is calling for the females already. He and Beauty are together, but with Diva as close neighbour Blacky will have lots of enriching smells around him. Hopefully he will be as productive as last year, but a better survival rate of the kittens we hope. Black footed cats are a rare and endangered species, the smallest cat of South Africa, second smallest of the world, very difficult to keep and breed. We are very proud that we have three ambassadors in our project, and will continue the conservation and breeding program to give the species all possible support.  We will keep you up-dated about them!

Some additional info about the black-footed cat (or: small spotted cat):

The black-footed cat (Felis nigripes) is listed on Appendix I of the Convention on International Trade in Endangered Species (CITES), and is ranked as the most vulnerable of the sub-Saharan cat species by the IUCN/SSC Cat Specialist Group. Despite its current conservation status, the black-footed cat has received very little attention by the conservation community. In fact, a single study of their basic ecology represents the only detailed information available for this species in the wild. Critical information such as the species’ current distribution and the existence of distinct sub-species is still unknown. As natural habitat disappears, populations of black-footed cats may become genetically isolated, which may impact the reproductive success of the species. In addition, wild carnivores are coming into contact with an increasing number of domestic dogs and cats carrying a variety of diseases. 75% of all deaths in black-footed cats in human care are due to kidney failure, with amyloidodis as the most common cause. It is still unclear whether this incidence of amyloidosis reflects the genetic predisposition of the species or an adverse effect of the ex situ environment.