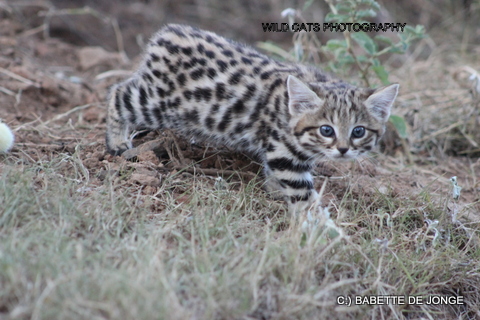 Sometimes you seriously wonder if this statement is about to become reality. The species being so vulnerable and threatened, but as for the value of conservation, or (lack of) conservation, and the difficulties of breeding/keeping in captivity and lack of co-operation between the facilities who do breed/keep them. The few years we work with/for these cats and are trying to get as much info about the species, is a good eye-opener. We learnt so much (and still are) and maybe even more so about the conservation value and the people/org’s working for/with the species.

A few facts to start with:
– The smallest catspecies of S.A. has a very limited gene pool, and apart from that there’s many threats in their natural habitat, like e.g. bigger predators such as jackals, but also humans (farmers) killing or capturing and trading them.
– In S.A. captivity the few facilities with black-footed cats (not many left) do have black-footed cats taken from the wild, in one way or the other, and have very few breeding successes. Lots of diseases like amyloidosis are causing the death of many bfc’s in the wild and in captivity. Projects with many breeding successes (or beginner’s luck) in the past were running out of bfc’s.
– In Europe same story. The zoos (like Wuppertal Zoo) known for their many successes breeding and keeping bfc’s lost all their bfc due to different diseases, esp. amyloidosis. In whole captive Europe the BFC has got extinct.
– In U.S. they still do have breeding successes but also there the gene pool is very limited and all individuals are somehow related. It was thought amyloidosis wasn’t a threat there anymore, but recently also a breeding couple was lost again. Also the lack of co-operation won’t help the species much. After once bad luck to bring some fresh blood in from the S.A. (wild bfc) who brought diseases and caused deaths to many bfc in the U.S. The regional SSP is now wanting to keep all that are born to rebuild the population in the U.S. They not even are willing to build a new population in Europe, but then again that wouldn’t do much good if you are just bringing in bfc with the same limited U.S. genes. Also the relevance of not wanting to go through all hassles of paperwork is apparantly more important then keeping the species alive, so no bfc’s are exported outside the U.S. at the moment. And esp. not to relatively young orgs (like the one of ourselves having 2 unrelated females, but currently no male (or fresh blood) to pass on their genes, or at least try to.
– The very few bfc’s in S.A. are also desperately kept in the projects where they are, no chance for breeding loans there. 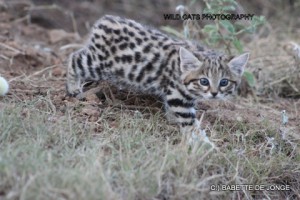 So yes all mentioned above but mainly the lack or conservation or co-operation will in the end maybe cause the first statement becoming reality “Black-footed cats, a species meant to get extinct!”

At this moment we have two female BFC ambassadors Beauty and Diva, and they will be looked after with the best of care and attention, and hopefully they will have a long life. Fingers crossed we will be able to get another male in but then again, like with all species, will the breeding with BFC rescue the species from extinction?

No need to say they won’t be moved anywhere anymore, as stress is also what is killing them.