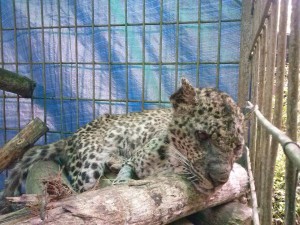 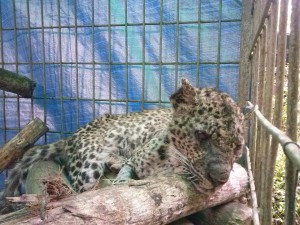 Leopard Sawal is deceased on Saturday January 16th. The last four days before his death, he did not eat very well, or at least not in a normal way. On Friday Pak Alen, the carnivores keeper, found already that Sawal showed different behavior, he was restless. Saturday by noon he was really sick, around 2 am he was still walking around but was definitely not ok. Sawal was getting very weak but the vet could not do much, she did not dare to tranquilize him because due to his weakness, he would not survive the anesthesia. At the end it all went very quick and around five o’clock he died! We still have no idea what it could have been and have absolutely no indication. The autopsy still has to be done, hopefully this upcoming week. Once the autopsy is done we hopefully know what caused his death and we will let you all know.

Unfortunately there is more sad news. Yesterday we had to euthanize the female leopard. Her situation had improved significantly in the first month, she had gained weight, her muscle mass had increased, she was clearly much stronger and looked a lot better than when she arrived at our place. But in recent weeks there was not much progress on her body condition. It was obvious from the start she was blind at one eye but meanwhile it became clear she was blind at both eyes. We saw from the beginning there was a kind of haze over her other eye and hoped that it would recover but ultimately this has not happened. We’ve done all sorts of tests to make sure she was blind in both eyes and this was clearly the case. She literally ran into things although finally she knew the layout of her cage better and even tried to climb. After many consultations with everyone involved we made the decision to euthanize her. It was not fair to a wild born leopard to let her life go on this way, blind and captive for the rest of her life! It was a very difficult decision because she has fought so hard and has been so brave but with the poor prospect she had this was the right decision.

We are all still very upset and sad, the death of the female leopard and Sawal has touched us deeply!

RIP precious Javan leopards, you will never be forgotten.