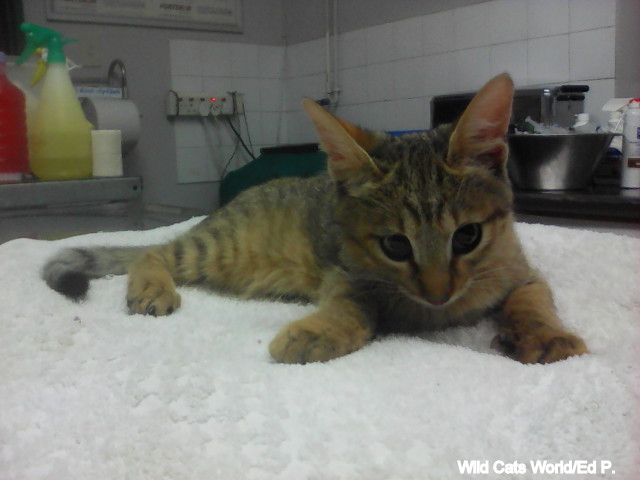 We are often asked why we keep “domestic” cats in our project, referring to our African wild cats, with pure bloodline/genes. The African Wildcat (felis silvestris lybica) is under threat also due to breeding with domestic and feral cats in their territory, so they are important for a conservation program. That’s why we also have two kittens, of proud parents Max and Louise. That the ancestors of the domestic cats are wild indeed, was shown again recently at feeding time. Sadly this caused a broken leg to poor Milow, and injuries to the arm of our caretaker Betty.

The first time both wild cat females Sid and Louise were so fierce at feeding time, “attacking” the kittens. Maurice did run off and was fine, but sadly the less afraid (and more up front) Milow was being jumped on first by Sid and then by Louise. Interference by Betty to help out the unfortunate little boy was rewarded by another “attack”. We still don’t know what caused this sudden appearance of “aggression” as while eating and after eating it was all peace and quiet again and the females and kittens went relaxing together as normally.

Only, poor Milow’s leg seemed to be injured badly. It was broken we heard at the vet. He was in surgery and we just received the good news that he looks ok for now after operation, but bad news is that they couldn’t save his leg, a pin wouldn’t hold it. So another 3-legged cat, but if we see Beauty the black footed female (who was brought in after being injured in a gin trap) : she is rushing back and forth on 3 legs, even gave birth, and she seems not to be bothered. Cats are survivors, Milow gets another chance and he is still young. 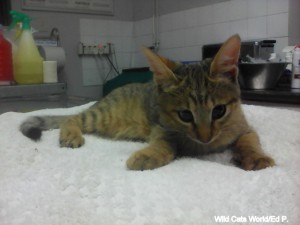