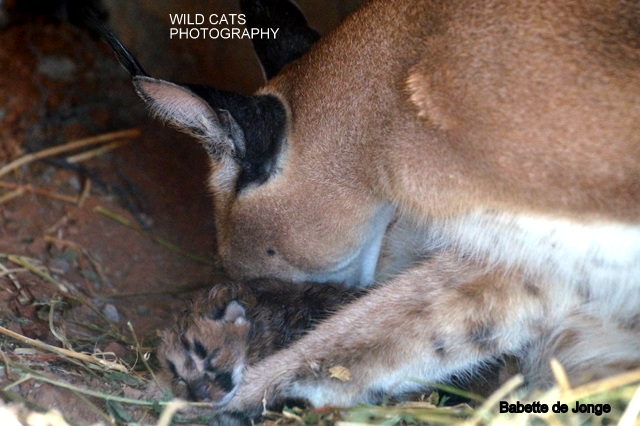 Nature: About life and death – A must read!
(Tribute to our female ambassadors of all species!!!)

All the projects we do with our organisation WCW are focused on education & conservation, on supporting species in the wild, but also about creating the best possible and natural life in captivity or best option: free ranging projects. I did give (photo) workshops to show people the cat species in their natural habitat, and with our ambassador cats in the S.A. sanctuary (meaning: save heaven!) we try to learn more about the species, and by sharing every detail (well, within reason), so not only happy stories and the births with surviving cubs/kittens we share, but also the losses, as they are a huge part of nature. Not just with us, as other orgs, zoos and not to forget in the wild, have to deal with sad losses but most of it won’t see the light, or the info hasn’t been shared. But to me this is very essential, as I have gained so much new info about the behaviour of the species and individuals, and I learnt so much from the great cat mommies in our project, whether their first litter was successful or not. It is part of life, and being a huge (wild)cat lover it of course always makes me very sad to have a loss, but due to the so many experiences we have doing this project, it is easier to deal with it, or to turn a loss also into something positive, to learn from it and to educate others by sharing the essential info. Working close with these cats in different ways, sharing the happy and sad moments, made me also grow….being able to handle things better. Of course losses (un) intentionally cause by humans, isn’t part of this. That is unnecessary and a waste at any time. Like we had to loose caracal Nina (I) injured and killed by a frustrated caretaker (and owner) in a sanctuary, or leopard Felicia’s brother (cub) Floris (and almost Felicia herself) due to stupidity and lack of care by an org and vet, but natural causes of death that is just part of life…..part of nature. Also with us. The reason for starting this article is the recent loss. We shared the happy birth of the serval kitten (male) of Joy and Norrick, first litter and sadly it wasn’t meant to be. The caretakers saw the cub was dead when Joy was standing for a moment and they got a glimpse (for the first time). She nor Norrick did eat the cub but Joy took it with her outside. Very sad of course but that’s life and actually not unusual with a first litter. What could be the cause is a lack of milk. This can be caused because often one cub or kitten isn’t able to trigger the milk production enough. Esp. with cheetahs this is well known fact, and because of this cheetah mothers usually don’t waste time to try and raise “just’ one cub. This could be the case now with Joy too. She for sure was a great and protective mommy, so it gives hope for the future litters. I was 100% convinced our female cheetah Speedy was pregnant too, start of this year. People always judge the size of the female but I also watch their behaviour, and actually so far hasn’t been mistaken as knowing our cats and their behaviour, it clearly shows. Now, after Joy’s ordeal, I am even more convinced the same thing happened with Speedy. She probably also gave birth to “just” one cub. No traces were found but that is not unusual either, as most cats do eat their cubs/kittens when they died, part of nature. But also in our cheetah camp other ‘predators” (like birds) have access to it, but most likely the mom did it herself. Another similarity between Joy and Speedy’s situation: they both had a few days in their pregnancy they weren’t really well. Same with caracal Nina (II) after birth, when she stopped eating. With wildcat Sid her first litter of 2 kittens also disappeared so were for sure eaten after they died (Sid was very inexperienced and nervous first time), maybe by dad Max as Sid was very angry with him after that.

Takes me to some other great observations. It was easy to tell the catmommies, each one of them, have more feelings than lots of people or scientists give them credit for. They mourn their loss too, and they have their “farewell” ritual, and yes before they actually give up on their dead “child” and either let us take away the remains or do eat it themselves, takes some time. Lots of orgs justify their actions of taking cubs away from the mother in order to handraise (or “tame”) them, saying the mothers don’t mind, but they do and they also sort of mourn and search for their babies then and it is heartbreaking. One of the reasons we are against this, and though it sometimes might seem the one option to pull through a kitten (we shortly tried with Nina’s second cub after the first one died, though we felt it was a lost case, but that is human not wanting to give up), we prefer to nature taking its course, and give all the mommies the chance to do the job themselves without any interference. Even though this might not always turn out well, even not a first attempt, BUT now we reached the point all our females one time got the opportunity to raise a litter, and for each one of them it clearly showed they were good and caring mothers, protective too. Only Sid, Speedy, Nina and Joy for some reason (1st experience, or medically caused) weren’t successful first time round. But positive we are for their next attempts. 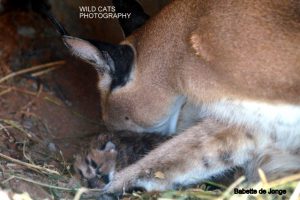 Successful in raising as for giving the first milk and care were: caracal Lea, Black-footed cats Beauty and Diva, African wildcat Louise (second time round now) and leopards Feline & Felicia. Not all cubs/kittens did make it to adulthood though, by clumsiness of the mommies and assisting mommies (one of Feline’s cubs, one of Louise first kittens due to Sid) or some black-footed cat kittens (born at CCT in Cradock where our black footed cats lived temporarily) with no actual cause of death clear after necropsy, but this shows in small what happens out in the wild too, where’s even more threats by other predators. Survival of the fittest, some aren’t meant to be. But we keep on giving our cats the chance to live naturally with the least possible interaction, and don’t derive them from giving birth (and at times having to deal with losses). For the survivors….as we only do breed a responsible way, not any of the cubs/kittens will leave us if we aren’t sure they get an even better life. Like the two leopardcubs soon (if all turns out fine permit-wise) will leave to a great Private Game Reserve, more space and closer to nature and their offspring being part of the Big Five in the future. Same option we have for other cubs/kittens. We only did have the caracalmales castrated as these projects aren’t yet possible for them, and we like to keep them all peacefully together. If at anytime an opportunity will arise we can always give our Nina (II) another chance with an unrelated male, but for now not an option.

As said however sad the losses, the positive thing is we learn so much again, and I cannot be more grateful to the great females we have, whether successful first mommies or not, for showing me their true behaviour, the ultimate care and protection they offer, each one of them, to their off spring. And i hope you all will get a better understanding of what and how we are doing our projects, and what we want to achieve.

The only thing we can do is giving the best possible “tools” to our cats, as in space, best food and (the right) company…for the rest it is up to themselves to live their lives, with a little interference as possible from us.

As for all cats we love(d), care(d) for, or lost…adults or cubs….they make a difference, and by all described here you have to agree they make the best ambassadors. Not by showing a tame version of their relatives in the wild, being exposed and exploited, but by showing their true wild, natural and caring behaviour!!!!

Who is remembered, will live on!!!!